The Association organised its first President’s Cup Football FIFA Tournament on Tuesday, February 16th which ended on Friday, February 26th 2021. The objective of the tournament was to bring young practitioners together through a healthy competition as well as foster a healthy rivalry and relationship amongst them.

Fifteen (15) agencies participated in the competition for the grand prize of two hundred thousand naira (N200,000). 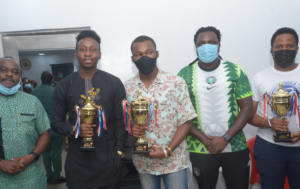 After a gruelling match, the victory went to VD Team from Verdant Zeal who beat Tequila Limited; 5 – 2, becoming the first agency to win the first ever AAAN President’s Cup Football FIFA Tournament.